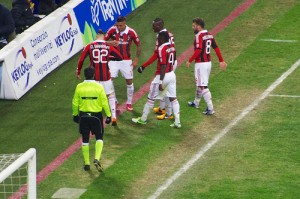 Europe’s governing body for soccer announced on Wednesday that soccer players would face a ban of 10 games and team supporters could be banned from entering stadiums under the new antiracism measures that are being drawn up.

Gianni Infantino, the General Secretary of UEFA said soccer must do more to rid the sport of racism following a big wave of incidents with high-profile players recently.

Dynamo Kyiv from Ukraine was ordered today by UEFA to play one game without any spectators during next season following their supporters’ racist conduct during two matches against Bordeaux and Paris Saint-Germain, both teams from France.

Infantino said there needed to be sanctions and they had to be of a deterrent kind. He said they are proposing that if a player or an official is found to be guilty of committing racism they would be given a ban of 10 matches at the least.

Under these plans, which only would be applicable to the Champions League and the Europa League of UEFA, there would be partial stadium closures for the first incident by supporters and a complete closure for the second offense.

Soccer has had a hard time grappling with racism and the head of the governing body of world soccer FIFA, Sepp Blatter suggested in January that fines being imposed did not work and he proposed that teams face deductions in points or even being relegated.

Blatter’s reaction came about because of an incident during an Italian match between AC Milan and Pro Patria a fourth division club. Kevin-Prince Boateng and his AC Milan teammates left the field of play during the game after racial taunts from the crowd.