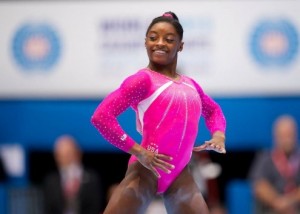 Last week American gymnast Simone Biles won the world all around title to become the first black woman to do so. However, racist comments took away from the proud moment of the 16-year old.

After the American had won the bronze medal for the balance beam in Antwerp, Belgium at the world’s, Carlotta Ferlito, an Italian gymnast said in an interview, that she had told one of her teammates that the next time they would be better off painting their skin black so they also could win.

Ron, Simone’s father said he found the remark insulting and that is was completely out of line. Nellie, Simone’s mother said she had spoken with her daughter the past few days after hearing about the comment. Her mother said Simone was not bothered by the remarks.

Simone’s mother told her daughter not to worry about them and do not let it ruin her moment and just be proud of the outcome and her performance.

People are able to have their opinion, said the gymnast’s mother. She added that her daughter would not address the comments or speaking publicly about them.

Her father added that the comments were ironic since usually it is not in Simone’s favor to be black, at least not in the world that he lives in.

U.S. Gymnastics officials on Wednesday said they were planning to contact the Italian Gymnastic federation about the comments.

On Tuesday, Ferlito made an apology on Twitter saying she wanted to apologize to the girls from the U.S. and she did not want to sound racist or rude. She said she loved Simone and was a big fan of gymnastics in the U.S.

She also wrote that she had made a mistake because she is not perfect and did not think about the comments she was making. She called herself human and once again said she was sorry.

Steve Penny the president of USA Gymnastics released a prepared statement that said the federation was proud of all its athletes and their successes at the recently completed World Championships, especially those of Simone.

Biles won not only the All-Around gold, but also three other medals. The statement said the U.S. was disappointed by the comments from Ferlito and that gymnastics has talented athletes worldwide with no place for any racial insensitivity.