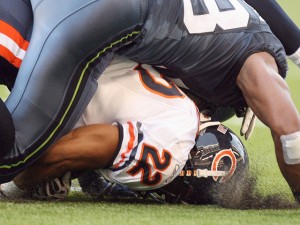 Researchers who are researching a degenerative form of disease in ex-NFL athletes say that 11 of the 12 brains of dead former players that were tested during the last year had showed signs of the development of chronic traumatic encephalopathy (CTE) which continues a trend they have tracked.

A story on lne Friday said that out of 91 brains examined of former players in the NFL 87 of the had CTE in some stage of development.

According to the report, many of the brains of players had been donated for this research had suspected they were suffering from CTE.

Gina DiGravio-Wilczewski, a manager of media relations at Boston University, where some of the brains had been examined provided figures of the year’s research at the hospital.

Linked to a repeated amount of brain trauma, the disease has symptoms like memory loss, depression, impaired judgment and eventually, a form of dementia that is progressive.

Junior Seau was an ex-player of the NFL diagnosed with CTE posthumously. Last month he was enshrined into the Hall of Fame, three years after committing suicide at 43 years of age.

An NFL spokesperson said that the league knows much more than 20 or even 10 years ago. The spokesperson added the league learning as more and more research is carried out.

However, added the NFL spokesperson, the league is not in a waiting mode to make football and its players safer, the league has been and continues to make all the necessary improvements.

A neuropathology chief in Boston said that people think medical experts are blowing this problem out of proportion and that it is a disease that is very rare. The doctor’s response to that was from where she and her colleagues see it the disease is very real.