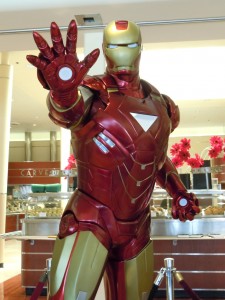 Disney’s most recent sequel Iron Man 3 took home over $175.3 million for its debut weekend in North America that was spread across 4,352 cinemas. It was the second best debut weekend ever behind just the $207.4 million that The Avengers posted a year ago, on the same weekend.

The film earned a healthy $41,218 per cinema and was helped immensely from the extra boost by the IMAX screens, which represented nearly $16.5 million of the movie’s opening weekend take.

Nearly 45% of the tickets sold were for the 3-D format. Just as with The Avengers, the new Iron Man 3 played to a broad range of demographics, but with a slight tilt toward older males.

Disney said that 25% of the audiences were 55 years or older, with 61% being male. Disney also said that 52% of all viewers at the movie were couples, while 27% were families and 21% teens.

The third version opened higher than the previous two, which is not too surprising as it arrived following The Avengers.

The film, with some positive word of mouth help, could end in the range of $400 million. However, it will be facing big competition in the next couple of weeks as Star Trek Into Darkness debuts along with the ever-popular Fast & Furious 6. However, most feel Iron Man 3 will take the top prize at the box office for the summer.

The movie’s international take stands at $504 million and has already passed Iron Man 2’s take of $331.5 internationally after only 12 days of being released.