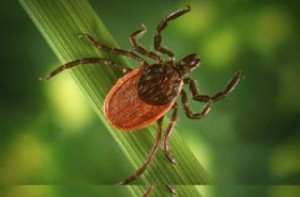 Vermont’s Lyme disease rate is the second highest in the nation, according to the Center for Disease Control. The infection rate in Vermont is close to 10 times higher than the national average for the most common tick born sickness.

Vermont has an incidence rate of 76 cases of Lyme disease for every 100,000 people, which represents less than 1/10 of the state population.

The state with the highest incidence of the debilitating disease is Delaware, while the third highest is New Hampshire. The area of southwestern Vermont has a far higher incidence rate than the Northeast section of the state.

An infected tick must bite a human host for a minimum of 24 hours in order to transmit the disease. Adult ticks take longer or about 36 hours, to infect its host.

The people most prone to contract the disease are older people and children, as well as people who spend a great deal of time outside. The ticks are commonly found in areas of high grass, brush, woods and where large amounts of leaves fall.

Vermont has launched an education campaign focusing on awareness for Lyme disease. The effort includes curriculum for students at the elementary level and information for medical care providers.

Over the last decade, there have been sharp increases in cases of Lyme disease in the northern part of New England, sharp decreases in Rhode Island and Connecticut, while Massachusetts has seen a small decline.