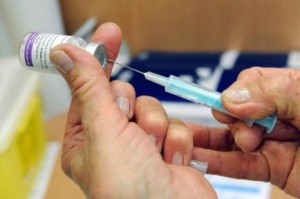 Receiving a flu shot helps cut the risk of a heart attack and stroke by over 50% in those people who have already suffered a heart attack, shows a new study.

The lead author in the study, a cardiologist from the University of Toronto and Women’s College Hospital said the study might have identified the vaccine as a vaccine to fight heart attacks.

Researchers looked at six studies regarding the health of the heart of over 6,700 males and females whose averaged 67 years of age.

Half of the people received flu vaccines; half a placebo or nothing.

Close to one third suffered from heart disease and others had high risk factors like high cholesterol, diabetes, high blood pressure and smoking.

People who suffered a recent heart attack and who received the flu shot were 55% less apt to have a major cardiac event like a stroke, heart attack, heart failure or death due to cardiac causes.

Other findings in the study showed that overall a 36% reduction in the risk of a major cardiac event like a stroke, heart failure, heart attack or death from heart related causes, was experienced.

Theories over why the flu vaccine helps include the vulnerable plaque theory. This is where the inflammation caused by having the flu might turn stable plaque into unstable plaque and cause a cardiac event.

Plaque is the buildup in the lining of arteries of cholesterol, calcium, fatty substances and fibrin, which is a clotting substance in blood.

Another theory is that side effects from flu, such as low oxygen, coughing, low blood pressure or a fast heart rate might strain the heart causing a cardiac event.