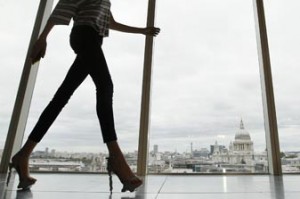 Skinny jeans have made the headlines recently and not only for good things. A woman in Australia who is 35 apparently was stuck inside her skinny jeans and was forced to be admitted to the hospital according to a magazine.

Someone found her lying on the ground and rushed her to a nearby hospital, Apparently the skinny jeans she had one while helping a person move from one apartment to another and the repeated overall movement and squatting caused her muscles to swell in her legs.

The woman began to feel numbness in her feet and fell to the ground due to loss of sensation and she lay on the ground for a long period before she was discovered.

Upon arriving at the hospital, her legs were very swollen and her ankles weak. The hospital had to cut her jeans off and she had to be treated from hydration and remained hospitalized for four days.

Doctors have said that this might be more of serious issue that what people have realized. Using these types of jeans causes a loss of movement and feeling in the legs, especially the lower part.

One doctor has said the he believed the incident took place due to the continuous movement that was involved while have the pants on that had been too tight.

He also believes that this was not directly due to the use of skinny jeans, as they are not a dangerous thing on their own, but if too tight, they can be.

The issue was not caused by the jeans alone, but the doctor warned that people wearing them should not wear them too tight.

When pants become too tight, movement becomes restricted and the muscles become pinched, which can cause swelling to occur.

Over a period of time, serious damage in muscles might occur due to wearing them continuously.

The doctor added that something like this will not always happen to everyone, but that people should remember that wearing restrictive and tight clothing should not be something done all the time. He advised that it might be better to wear jeans that are loose as a precaution.