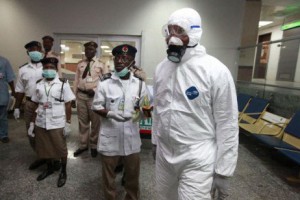 Sierra Leone launched its controversial shutdown of three days on Friday in an attempt to contain the spread of the deadly Ebola virus. The Security Council of the United Nations declared the outbreak of the deadly disease a threat to world peace.

Most of the population of approximately six million in Sierra Leone was confined inside their homes starting at midnight with just essential workers including security officials and health professionals exempt from the three-day lockdown.

Close to 30,000 volunteers will be going door to door educating the locals and handing out soap in what could lead to many other patients and bodies being located in the homes around the country.

Health experts criticized the three-day lockdown, arguing the coercive measures to stop the flow of the epidemic could possibly backfire and would be difficult to implement.

The group Doctors Without Borders has warned that the lockdown might cause people to go underground and to jeopardize trust between the health providers and people.

However, Ernest Koroma the President of Sierra Leone said if the population heeded the advice of volunteers the campaign would help greatly to reverse the trend that is increasing of the transmission of the disease and will be a big boost to the collective effort to stop the deadly outbreak.

The extreme lockdown comes amidst the mounting concern globally over the epidemic of Ebola, which has thus far killed over 2,660 across West Africa.

Paranoia over the spread of Ebola is so high that in Guinea, seven volunteers sent to help educate the villagers about the deadly disease came under an attack by locals and were found dead. The locals apparently had feared the group meant to do harm to them and responded with violence.

The Security Council at the United Nations in New York adopted a resolution unanimously declaring that the outbreak of Ebola constituted a threat to international security and peace.

The Security Council said immediate aid was needed and urged nations across the globe to lift border and travel restrictions.