Pfizer Recalls Effexor Due to Mistake 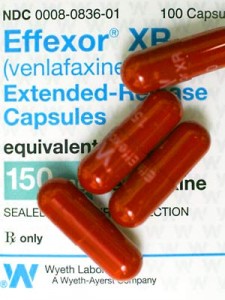 Late last week, Pfizer announced it was recalling Effexor XR its antidepressant as well as another lot of a drug that is its generic version. The announcement followed the discovery by a pharmacist that found a bottle of Effexor contained a different drug.

Inside the Effexor bottle, the pharmacist found the drug Tikosyn, which is used for a potentially dangerous yet common irregular heartbeat known as atrial fibrillation.

Pfizer said that using Tikosyn by a patient instead of Effexor XR could cause adverse consequence that might be fatal.

Experts said the side effects produced by Tikosyn could be serious and lead often to Tirade de Pointes an abnormal heartbeat, which can sometimes be fatal.

Pfizer also said that amongst three lots there were approximately 104,450 bottles and of that total close to 65,800 were already in pharmacies across the U.S. The recall includes one group of Effexor XR in that are 30-count bottles, one group of bottles that are 90-count and one group of a 150 mg dosage of venlafaxine sold by generic drug maker Greenstone LLC, which is also owned by Pfizer.

This recall does not affect any of the other generic versions of this medication that are made by any other manufacturers, said Pfizer.

The FDA, in a prepared statement asked that pharmacists quarantine and then immediately return all of the lots that were recalled. A prepared statement by the drug maker said that Pfizer responded to the problem on a rapid basis so they could ensure the safety of all people using their medication.

Pfizer said that the recall was being carried out with the complete knowledge of the U.S. FDA.

It is unknown how many of the 65,800 bottles were already sold to patients using the medication. Pfizer did say that there have yet to be any reports of patient using the anti-depressant medication that have reported serious side effects from the possible ingestion of the heartbeat medication.