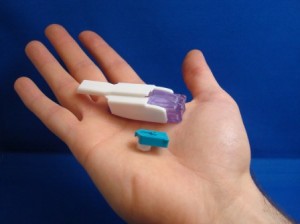 People who have type 1 or 2 diabetes will now have another means of taking their medication. The U.S. Food and Drug Administration approved on Friday the first inhaled treatment for diabetes.

Afreeza, the new drug, is a treatment option for those patients with diabetes that require insulin at mealtime, said a doctor with a FDA’s Center for Evaluation and Research.

The doctor said the approval of Afrezza broadened the options now available for receiving mealtime insulin in the daily management of diabetic patients who must have it to control their level of blood sugar.

Diabetes has two main forms. Type 1 is an autoimmune sickness, which often is inherited and is characterized by a dysfunction of the pancreas’ insulin producing cells.

Type 2 develops over a period of time while being tied closely to obesity.

Between 90% and 95% of the cases of diabetes are type 2, according to data from the National Institutes of Health in the U.S.

It is estimated by the FDA that nearly 26 million people in the U.S. or more than 8% of the overall population now have diabetes. The sickness can lead to complications that are dangerous such as vision loss, kidney and nerve damage and heart disease.

Many diabetes patients must inject insulin on a daily basis to maintain their level of blood sugar correctly.

The approval of Afreeza came following a study that involved over 3,000 patients with 1,000 having type 1 and 2,000 with type 2 diabetes.

For those with the type 1 researchers compared Afreeza’s effectiveness in patients who were adults against a fast acting insulin used in both cases against basal insulin.

For those with type 2, Afreeza was combined with standard pills for diabetes and compared to the inhaled drug as well as a placebo.

The FDA said that after six months the Afreeza medications combination had produced better overall results.

The FDA stressed that the inhaled drug should never act as a substitute for insulin that is long acting and that patients who have type 1 must use a combination of the drug with long acting insulin.