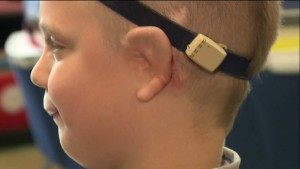 For most of the kids, the first day of school is to show off their new clothes and explain to their friends what they did during the summer. However, for Eli Bell an 8-year old, it was about showing of a new pair of ears.

Aaron his father said all his son had before his surgery was pieces of cartilage. He said his son had been born without any ears, which is a condition known as Bilateral Microtia.

Bell said that he and his wife had no idea their son would be born with the condition. They both knew that reconstructive surgery was needed by were not sure of a place to take him.

However, that changed when they met pediatric plastic surgeon Dr. Ananth Murthy at the Akron Children’s Hospital.

Dr. Murthy said that after checking Eli he determined nothing more was wrong with him besides the condition. Following that Murthy created a pair of ears using rib cartilage from Eli and skin grafts. The process took over four years to complete.

Eli has now gone through his surgery and is very happy with how his ears look. He said he was thankful he now has ear and called himself special.

Eli went through five surgeries to create his new ears, beginning with the skin graft from his thigh, to make a gap between his head and his ears.

His last surgery was completed in July when his ears were given detail.

The doctor called the last surgery an artistic procedure saying the body wants to heal and flatten things out and he had to work like an artist to make the natural curves that ears have.

Doctors and family believe the new ears will give Eli more confidence, which will translate to better work in school, strong friendships and better overall relationships.

Murthy has been called by his colleagues at the hospital a Doogie Howser type. He completed his undergraduate degree at just 19 and his medical degree at 22.