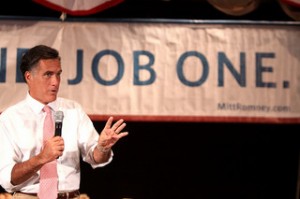 It seems as though the presidential campaign for Republican nominee Mitt Romney is in complete disarray thanks to stories that surfaced on Monday that revealed tension within his campaign, particularly the displeasure with a trusted advisor of his, Stuart Stevens.

However, it was the hidden camera late in the day that was the biggest bomb that blasted the Romney campaign. A video showed a number of different candid moments from a fundraiser of Romney’s in May.

In the video, Romney said amongst other things, that it did not matter what he did, 47% of the U.S. population would vote for current President Barack Obama. He said that because he feels; they depend on the government, as they believe the government’s responsibility is to take care of them; they believe they are entitled to receive healthcare, food, housing; as well as other benefits.

Romney is also shown in the video saying his job is not to worry about those kinds of people, as it will be impossible for him to convince those people to care for themselves and take personal responsibility over their own lives.

Nevertheless, even with the leaked video, voters are still waiting for the set of debates in October to make a final decision on Romney. That at least was what one focus group in the swing state of Virginia concluded.

The group said that despite a barrage of advertisements, neither one of the two candidates has satisfied voters through their promises or proposals. Many are hoping the debates will cut through a great deal of the attacks and clutter and reach the problems that need to be discussed.