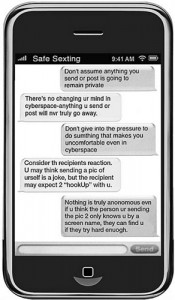 One of seven high school students in Los Angeles who have a cell phone has sent photos or a test message that are sexually explicit, according to a survey. In addition, the survey said that sexters are more apt to take part in sexual behavior that is risky.

The Los Angeles teens that had sent the text or photos that were racy were seven times more apt to be active sexually than those teenagers who claim to have never sexted.

What the surveyors wanted to find out was if a link existed between taking risks with your own body and sexting. The answer, said surveyors was a resounding yes.

Another study of high school students in Houston, Texas earlier in the summer found that 25% of teens had at some time sent a photo of themselves naked via an email or text message. Those particular teens were also much more apt to take part in risky sex.

The recent survey’s findings came from 1,839 LA students in high school, with the majority being Hispanic. Seventy-five percent of the teenagers had a cell phone they used on a regular basis.

In a recent survey that the Centers for Disease Control sponsored, over 40% of the teens that participated said they have engaged in sex and close to 67% said they had used a condom.

The reason the rate of sexting in Houston might be higher than in Los Angeles might be due to demographics differences however, the two surveys were consistent.

Researchers believe that somewhere between the Houston and Los Angeles survey is where the national average is.

The Houston study also found that females who sent nude photos of themselves were much more apt to engage in sex that was risky, to have a number of sexual partners and to use drugs and alcohol before having sex.