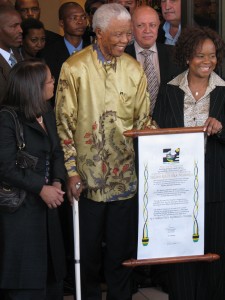 U.S. President Barack Obama met on Saturday privately with the relatives of Nelson Mandela, the former President of South Africa. The anti-apartheid icon who is 94 years of age remains in a South African hospital in critical but stable condition.

The White House released a statement that said Obama had referred to Mandela by Mandela’s clan name “Madiba.”

The statement said the president had expressed his hope that Madiba draws comfort and peace from all the important time he is amongst loved ones. Obama also expressed support to the entire Mandela family as they try to work through such a difficult time.

Obama said he also reaffirmed the deep impact Mandela’s legacy has had in creating a South Africa that is free for all, and in inspiring the world’s population, including Obama himself.

Obama met with Makaziwe Mandela and her sister Zindzi Mandela, both daughters of the former South African president as well as eight of his grandchildren.

The meeting took place in Johannesburg, at the Nelson Mandela Foundation, on the first day of President Obama’s visit in South Africa after his arrival from Senegal.

However, Obama was not able to meet Mandela, but did tell the press in his flight from Senegal to South Africa that he was very grateful that he and his wife and daughters had met Mandela on a previous occasion.

Obama has a photo with Mandela from 2005 that he keeps in his personal office in the White House. It was from their only meeting when Obama was just a junior senator from Illinois.

He refers to Mandela as one of his personal heroes.