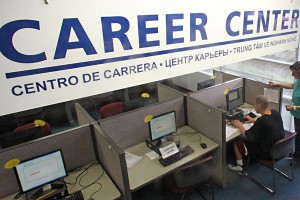 The fewest Americans in the past four decades filed last week for benefits of unemployment, continuing to lower the surge of early July that was likely tied to the mid-year shutdowns in factories and vacations at schools.

The forecast of economists was for 278,000. The volatility is typical during this part of the year as auto factories retool to prepare for the new models for the upcoming year and staff at school varies due to vacations, a department of Labor spokesperson announced on Thursday.

Claims are continuing to stay near levels that are historically low as employers are keeping workers to help with the increase in demand following a slump during the early part of 2015.

Combined with a steady amount of hiring across most states, the improvement will help to sustain spending by households, which represents the largest part of the economy.

Companies are keeping employees because of the need to satisfy current demand as well as for initiative of growth, said a senior economist on Wall Street.

Since March, claims have fallen below the level of 300,000, which economists say typically is consistent with a job market that is improving.

Typically auto plants are closing this part of the year, as they have to retool their operations for next year’s new models.

Often times the time differs from one year to the other making it tough for the Department of Labor to adjust its claims figures for those swings.

Last week coincided with a survey period for the July payroll report at the Labor Department. Because of the additional volatility, it is important to focus more on trends that are more long term.

The moving average for four week, which is much less volatile that numbers from each week, decreased from 282,500 to 277,000 during the survey period of June.

Last month overall U.S. joblessness was at 5.3%, which was a low of seven years.