Toshiba Markdown on Profit Nearly Doubles Its Prior Estimate 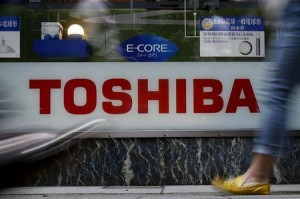 Toshiba Corp will likely mark down its operating profit from the past by as much as 100 billion yen or $814 million, which is nearly double its estimated restatement made earlier, due to accounting irregularities, said a person close to the situation.

In what could be shaping up to be the biggest Japan corporate debacle since the Olympus Corp one in 2011, an independent Toshiba appointed panel has investigated the electronics giant’s infrastructure after a financial watchdog in Japan warned of possible irregularities in finances during February.

Toshiba said this past May it would have to reduce its profit starting in 2009 through to 2013 by 54.8 billion yen due to improper accounting related to project costs mostly in its business of electric power systems.

Since that time, Toshiba and the panel also found problems regarding its semiconductor and personal computer businesses, which force the company to make preparation for another substantial restatement of earnings.

Toshiba earlier had touched on the problems in the two units, but did not reveal any scale of their impact on the finances.

Japanese media have reported that Toshiba had planned to markdown profit more on Saturday. The company responded by saying there was not specific figure to announce yet.

The independent panel was expected to report all its findings by the middle of July. Hisao Tanaka the CEO had hinted a major reshuffling of management would take place around that same time.

Because of the accounting problems, Toshiba had not reported its earnings for its yearend of 12 months as of March 31, which originally had been scheduled for sometime during June.

The company is hoping to file its earnings before the end of next month. Worries over the restatement of earnings and the corporate governance culture of the company have weighed on shares. On Friday, the stock closed at 423 yen, which was down from over 500 yen prior to the problem coming to light in May.

IQeon Trading Down 2.7% Over Last Week