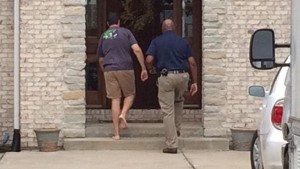 State and federal investigators reportedly served a search warrant at the home of Jared Fogle in Indiana Tuesday morning. Fogle is a spokesman for Subway who famously was able to lose over 200 pounds by eating only the sandwiches made by the company.

Sources at the FBI told a local television stations that the Tuesday raid had been part of an investigation into child pornography. It comes after Russell Taylor the former Jared Foundation director was arrested on charges of child pornography earlier in 2015. Taylor was in custody on May 6 when he attempted suicide and had to be placed on life support.

According to a local Indiana television station, Fogle was stopped outside his home, but was not placed under arrest and his wife and kids left the home after the search warrant was presented.

Fogle became Subway’s star pitchman 15 years ago, which helped to trigger a huge growth for the sandwich chain.

Subway was able to generate the perception of its sandwiches being healthy and it stuck, said an industry analyst.

That is a hugely powerful tool, as you do not hear many people saying how healthy it is to eat at McDonald’s.

Subway to date promotes Fogle’s weight loss heavily with ads and a section of its Internet site devoted to his own favorite sandwiches.

The raid began at 6:30 a.m. An evidence truck was seen parked in the Fogle driveway. Investigators from the State Police of Indiana and the FBI were also there.

Fogle at the time said all ties had been severed with Taylor after his arrest. Investigators did not say if the raid on Fogle’s house on Tuesday had anything to do with Taylor’s case.

Subway has over 43,000 stores worldwide.

Arbidex Price Down 9.7% This Week