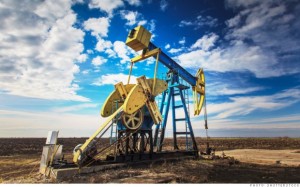 Oil prices dropped on Friday over concerns of the resilient crude production in the U.S. and a deal between the West and Iran that would unlock millions of barrels of oil to the world market that is already oversupplied.

The number of oil drilling rigs in the U.S. increased this week by 12 to reach 640 snapping a run of 29 consecutive weeks of declines. The rig count, which investors see as proxy for oil industry activity, has dropped sharply since the prices of oil headed downward in 2014. The oil output in the U.S. however has been strong and continued to put downward pressure on the price.

The global benchmark for oil, Brent crude fell by 1.2% on Friday in London. In a shortened session of trading in the U.S. due to Saturday’s holiday, crude futures in the U.S. were down 1.1% per barrel.

Though the increase this week was the first since 2014, there are still approximately 60% less rigs working since last October’s peak of 1,609.

According to Deutsche Bank analysts, the U.S. production of shale oil will drop over the upcoming months, likely through the early months of 2016.

However, the bank said the drop would prove shallow, owing to productivity gains, which would leave the market oversupplied during the first six months of 2016 by as much as 2.3 million barrels per day.

Currently, the oil market has an oversupply of 1.5 million to 2 million barrels daily, according to estimates by analysts. At the same time, the nuclear talks with Iran continue dragging on, but officials in the West want to reach a deal by next Tuesday, after an extension of one week to the previous self-imposed deadline.

On Friday, the International Atomic Energy Agency head said Iran and the agency worked out ways to deal with the questions about the past nuclear activities of Tehran.

A final agreement made to curb the nuclear program of Iran should pave the way for lifting the sanctions by the West and release more crude from Iran into the already oversupplied global oil market.