Profit at General Mills Cut in Half by Impairment Charge 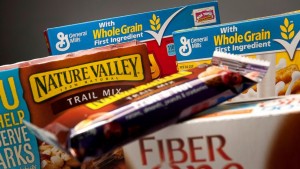 General Mills Inc, which makes Betty Crocker brownie and cake mixes and Cheerios cereal, said profit for the fourth quarter halved due to recording a charge of $260 million to write down its value of one of its canned and frozen vegetable businesses.

An assessment of its brand Green Giant, showed the market value of the business was lower than it the carrying value, announced the company on Wednesday.

General Mills put Green Giant up for sale in March, said people close to the matter. Shares at the company were up 0.5% to $56 in light trading early Wednesday.

The company, based in Minneapolis, Minnesota has been fighting with slow sales at home, where eating habits have changed and are driving consumers from some of the products that it sells.

That forced the company to lower its costs through improving its supply chain domestically, cutting some jobs and closing some facilities. Its bill for restructuring cost $35 million during the quarter ending May 31.

Revenue at its retail segment in the U.S., the largest by sales in the company, were higher by 5% to over $2.5 billion, which was helped from higher sales in snacks, frozen breakfast and yogurt. Sales in its international market were down by 8.8% during the market to just over $1.22 billion.

Net earnings that were attributable to General Mills were down 54% to just over $186.7 million equal to 30 cents a share. Excluding certain items profit ended at 75 cents a share, which topped Wall Street expectations of 71 cents.