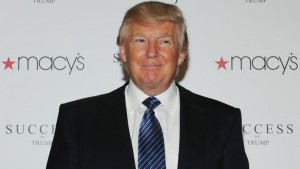 Macy’s has decided that the company would no longer do business with Republican presidential candidate Donald Trump after he made controversial statements denigrating Mexicans and immigrants. Trump called Mexican immigrants rapists and drug runners in a speech in which he announced his intention to run for president. He then doubled down on those remarks on Twitter.

Macy’s released a statement that said, “We are disappointed and distressed by recent remarks about immigrants from Mexico. We do not believe the disparaging characterizations portray an accurate picture of the many Mexicans, Mexican Americans and Latinos who have made so many valuable contributions to the success of our nation.”

Trump has been featured in a Macy’s commercial and Macy’s sold Trump’s clothing collection, which features primarily business clothing, as well as Trump’s fragrance, which is called “Success.” In a counter statement, Trump said that the decision to cut ties with Macy’s was his. He cited being upset that many of his products were being made in China as part of the reason for his decision. Overstock.com and Amazon also carry Trump’s merchandise.

Roughly 700,000 people signed a petition encouraging Macy’s to dump Trump and remove Trump’s merchandise from its stores. The petition on MoveOn.org read, “Macy’s has a special deal with Donald Trump. Trump is their de facto spokesperson. They invest in developing Trump’s brand, promote him in advertising, and sell his clothing line and fragrance at their locations. In the past, they have held major Trump-focused events at Macy’s Herald Square.” Several other companies have also decided to cut ties with Trump based on the remarks.

This is not the first time Macy’s has come under fire for the company’s association with Trump. Macy’s was petitioned to stop its association with Trump after he made allegedly sexist comments and denied the existence of climate change two years ago. According to The Huffington Post, Macy’s CEO Terry Lundgren defended Trump at the time, saying “ours is a free society compromised [sic] of a wide range of viewpoints.”