Losses May By Eminent For American Apparel Investors (NYSEMKT:APP) 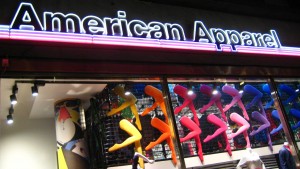 Investors in American Apparel are watching nervously to see if the troubles at the company will result in them losing their investment. The retailer recently announced that it does not have the funds to continue operations next year. This means that the company will have to find new financing or raise money before it runs out of funds. Shares of the company’s stock fell sharply after the announcement.

American Apparel warned that investors could suffer big losses on their investments if it does not come up with a solution to its issues quickly. The company says that it is exploring a number of options to keep the company afloat. Those measures include refinancing, new capital-raising moves, amendments and restructuring its debt.

The company has been facing falling sales for quite some time now. In the second quarter, the company’s quarterly sales fell 17 percent from the same quarter a year ago, falling to roughly $134 million. In July, the company said that it would close some stores to cut costs.

The company has lost money every year since 2010. The company estimated that it lost about $19 million, or 11 cents per share, in the second quarter of its fiscal year. That included $3.6 million in costs related to litigation. The company says it lost around $46 million in the first half of the year. According to data from FactSet, American Apparel’s market capitalization currently stands at about $24 million.

The company is also facing lawsuits from its ousted founder. Ex-CEO Dov Charney was fired in December after allegations arose that he had repeatedly violated the company’s sexual harassment policy. He has denied the charges and sued American Apparel, along with shareholder Standard General, for defamation. He is seeking a $30 million damage award in that case.