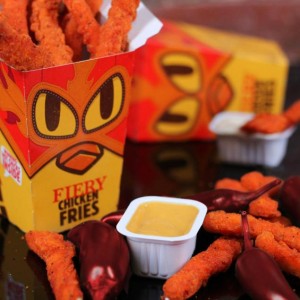 Burger chain Burger King hopes some heat helps it finish off its summer with some strong sales.

After chicken fries played a big part in boosting sales of same-stores by 6.7% during the second quarter, Burger King will introduce a spicy version of this cult favorite in the U.S. during this week.

The thin fried chicken strips are flavored with black and cayenne pepper and were created to appeal to the spice seekers, said the CMO of the burger maker Eric Hirschhorn.

He added that they wanted to make sure it work for people who like to eat spicy food, the idea is if it is too spicy it may offend.

The new spicy Chicken Fries will be served in boxes containing nine and will be sold for a minimum of a month as the burger chain attempts to build on it success of an time that had drawn in younger diners to the restaurant.

Chicken fries were first introduced back in 2005 and were on the menu for close to seven years prior to being pulled. The return was for a limited time back in 2014. In March, Burger King again made the chicken fries part of its permanent menu.

Burger King, which took over a year to develop its new recipe, is not alone in attempting to boost sales using spicy fare, which has become more and more popular amongst Americans.

The rise in popularity of Srirahca and the chicken wings popularity have pushed more spicy food into the mainstream in the U.S. of recent.

This year, for only the first time, a majority of people in the U.S. said they were seeking spicy food, according to a research firm.

Spiciness has a great deal of importance today for many Americans, said one research analysts, as it is especially appealing to Gen Z and millennials.