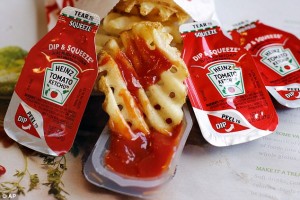 On Wednesday a federal jury in Pittsburgh rejected the claims of a Michigan man that a package of condiment he patented back in 1997 led to ketchup maker H.J. Heinz Co to develop its packets of ketchup known as Dip & Squeeze in 2010.

The plaintiff David Wawrzynski sued Heinz in Pittsburgh U.S. District Court claiming the package known as the Little Dipper he invented had led to the company, based in Pittsburgh, to develop its package that is dual-function.

A lid can be peeled from the Dip & Squeeze packets so food may be dipped into the ketchup. In addition, the end can be taken off so one can squeeze the ketchup onto the food.

Jury members agreed that the novel idea had been brought by Wawrzynski to Heinz, but disagreed over his claims that the ketchup maker had used that to develop their own version. Heinz therefore did not owe the man any money.

Had the jurors sided with Wawrzynski a second trial would have been needed to determine the amount of money Heinz would have owed him.

Eugene Boyle Jr. the attorney representing Wawrzynski told reporters the verdict had been disappointing but he was not sure yet if they would be making an appeal.

He said that he could not mention the amount of money he would have asked for because a report by an expert witness on the value of the contributions by Wawrzynski was not completed.

Wawrzynski started working at 13 in the food industry and developed a Wok to You business that delivers Asian food in 30 different restaurants in the Detroit area by the age of just 21.

Because of that, he started to work on sauce and condiment packaging and claimed his Little Dipper led to the dual function Heinz ketchup package.

The plaintiff did not make a claim that the exact design was copied by Heinz, but contended that the company had not been thinking about or made progress on such a ketchup package until he had pitched the idea of the Little Dipper to them back in 2008.

Next »
Europe Takes On Amazon, Google, Facebook and Apple