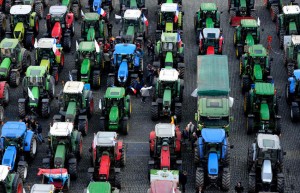 The streets in Brussels were filled with dairy farmers on Tuesday protesting the lifting of milk quotas in the European Union fearing that this move would glut the market with inexpensive surplus milk.

One milk farmer from Belgium said that with the quotas lifted, we are very scared that the production of milk will explode and we will not be able to pay all of our costs any longer. He had driven his tractor over 20 miles to the European Parliament where a rally was being held.

The EU quota system, which has kept the lid on the amount of production, will be ended April 1, over 30 years after being introduced in an attempt to stop the massive overproduction that resulted in milk lakes and mountains of butter within the EU.

This system will allow producers in Europe to compete with Australian and United States farmers targeting the expanding markets of countries such as Korea and China.

This move does not come as a surprise. The decision was announced over 12 years ago and the levels of the quotas have been raised progressively during the past seven years so farmers would get used to producing higher quantities of milk.

One farmer said that his son has already ended his idea of being a milk farmer. The farm, said the man is great and it is a shame to go to waste. He was one of a large group of about 50 farmers across 16 countries that participated in the Tuesday demonstration.

Though the quotas have been criticized, they provided stability in prices. The big fear the small farmers have is that the production will not be based any longer on how much milk is actually consumed.

That, the small farmer says will only benefit the large food companies such as Danone, Campina and Nestle and could lead to milk dumping abroad.

They say it does not serve any purpose to increase the production of milk and then dump in on other countries such as what happens today in Africa. That he said is killing farmers in both Africa and Europe.