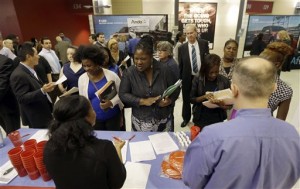 The number of people in the U.S. seeking unemployment benefits last week for the first time fell, suggesting the U.S. labor market has remained healthy.
The initial claims for jobless benefits a proxy for countrywide layoffs in the U.S. dropped by 6,000 to 271,000 for the week that ended on August 22, announced the Labor Department on Thursday.
The drop comes following four consecutive weeks of increases. Economists estimated that there would be 273,000 claims. The Department of Labor said no special factors existed that impacted this most recent weekly information.
Claims data tends to be volatile from week to week. Over a longer frame application for benefits for joblessness, remain at historical lows. The moving average for four weeks, which removes that same volatility, rose by just 1,000 to just over 272,500 a week ago, but is still very close to lows of 15 years.
Other data just released indicated the labor market has strengthened six years into this expansion. The U.S. economy produced 215,000 new jobs during July and added on average 235,000 over the past three months.
The rate of unemployment was at 5.3% during July. Job openings are still fairly high, suggesting that employers are continuing to grow.
The Labor Department is scheduled to release its payroll for August and its data on unemployment September 4. That is to be the last broad gauge of the labor situation in the U.S. that policy makers in the Federal Reserve will see prior to their meeting next month.
With the jobs market improving it could reassure officials at the Fed that they could raise the interest rates, which have been sitting near zero since the beginning of the recession.
The report released on Thursday showed that the amount of continuing benefit claims for unemployment – those that are drawn by former workers for over one week – advanced by 13,000 to just over 2.67 million for August 15. These continuing claims are reported one week behind other data.