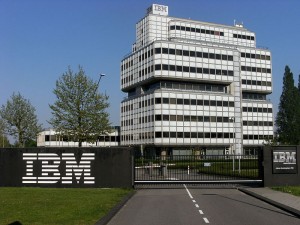 IBM’s overall profit and revenue declined in the second quarter of its fiscal year. IBM reported that its revenue fell 13 percent in the quarter. This was the 13th consecutive quarter of slipping revenue for the company. The second-quarter revenue fell short of the average estimate of Wall Street analysts of $20.9 billion, as compiled by Thomson Reuters.

IBM reported a 17 percent decline in net income for the quarter, falling to $3.5 billion. It delivered earnings per share from continuing operations of $3.84 a share. That was above the consensus estimate of analysts of $3.78 a share.

IBM has rapidly advanced into new fields, such as data analytics, cloud computing and mobile applications. The company’s second-quarter results showed encouraging progress in those businesses. Martin J. Schroeter, IBM’s chief financial officer, said in an interview that the financial performance for the quarter was a sign that the company’s strategy is on track.

Revenue from the newer businesses grew 30 percent in the quarter, excluding the effect of currency fluctuations. Revenue from cloud computing rose more than 70 percent, while the data analytics business grew by over 20 percent compared to the same quarter last year.

The company has set a goal of having those newer businesses account for $40 billion in revenue by 2018. This would total more than 40 percent of corporate sales. Last year, revenue from those business was roughly $25 billion, or 28 percent of corporate revenue. That was double their percentage in 2010.

The shift to software being delivered as a cloud service has been lessening demand for IBM’s traditional software products. Sales for IBM’s big software business fell to $5.8 billion in the quarter, a 10 percent decline from the same quarter a year ago.

Mainframe computers revenue rose by 15 percent. A new model, named the z13, began shipping in January and gave the division a sales boost. Sales of the big machines currently represent an estimated 2 percent of the company’s total revenue. The mainframe-related business as a whole, including mainframe software, storage, maintenance and financing, accounted for an estimated 24 percent of total IBM revenue and 36 percent of profits last year.