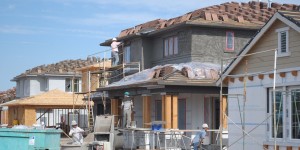 Construction of new homes in the U.S. was up in September, which is a sign that residential real estate will help bolster the largest economy in the world.

Housing starts were up 6.5% to an annualized rate of 1.21 million, more than what had been forecasted and the second highest in eight years, showed figures from the U.S. Department of Commerce on Tuesday.

However, a fall in the number of building permits means the rebound could be slow in materializing.

American consumers, driven by the improving jobs market, are maintaining the U.S. as they continue spending on large ticket items like cars and homes.

A pickup in gains in wages would be even more helpful to households by giving them the ability to save to make a down payment on a home helping to sustain the momentum in the housing market.

Estimates for starts in housing of economists ranged between 1.09 million to more than 1.2 million. The figure in August reached 1.13 million, which was little changed from the estimate.

The uptick in housing starts was mainly propelled through gains on multifamily homes, like apartment buildings, which were up 18.3% to more than 466,000 for the year. The advance highlights the increased demand for new rentals.

Construction of new homes for single families climbed by 0.3% for an annualized rate of 740,000, showed the report.

Building permits were down 5% to just over 1.1 million for the year, the fewest since this past March. The drop was concentrated as well on multifamily units, showing the data is volatile.

Applications for project for single family homes dropped by 0.3% to a pace of 697,000, which suggests this part of the housing market, will plateau over the upcoming months. Those permits for developments that are multi-family dropped by 12.1% to an annualized pace of 406,000.

Three of the four regions saw increases in housing starts during September, paced by a jump of 25.4% across the West.

Construction dropped by 12.2% in the country’s Midwest region, which was the largest drop since this past February.