Consumer Sentiment Bounces Back in U.S. 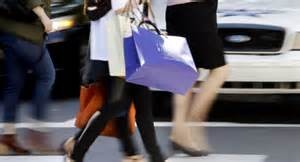 The consumer sentiment in the U.S. was able to bounce back strongly during the early part of October, suggesting the economic recovery had remained in place despite some headwinds due to weak demand globally and a strong U.S. dollar that have been weighing on the country’s industrial sector, in particular manufacturing.

The uptick in sentiment was reported Friday and underscored the robust demand domestically and offered new hope that consumer spending would stay solid enough to support growth in the economy, which slowed by a significant amount recently.

The University of Michigan announced that its consumer sentiment index was up during early October to 92.1 from the last reading in September of 87.2.

The current conditions of the survey moved up to 106.7 after being at 101.2 during September.

At current levels the index has been consistent historically with close to a 4% annualized rate of spending growth for consumers, said economists.

The increase in sentiment, which is likely to have reflected less gasoline prices, suggests little impact from the recent volatility in the stock market.

Consumer was more optimistic about personal financial expectations than at any time since 2007.

Views by consumers toward purchases of manufactured long lasting goods were bullish as well.

Consumer spending represents almost 70% of the economic activity in the U.S. It has been one of the bright spots in the U.S. economy as the U.S. industrial sector is wobbling under an onslaught of global growth slowdown and the strong dollar, which eroded demand for manufactured goods in the U.S.

It also has been weighed down through lower oil prices that undercut the energy sector capital investment and any effort by businesses to downsize their inventories.

In another report, the U.S. Federal Reserve announced that industrial output had dropped by 0.2% on a renewed weakness in the gas and oil drilling sector after dropping by 0.1% during August.

Industrial production was up at an annualized rate of 1.8% during the recently ended third quarter.