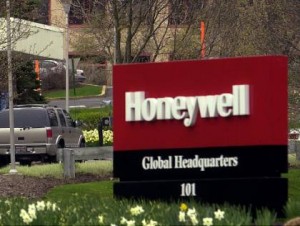 Honeywell International Inc has posted an increase that was better than had been expected for quarterly profit as the climate control systems and aircraft parts maker reined in its costs amidst declining sales.

Shares of Honeywell were up 3% in trading on Friday after the company raised its low end of its forecast full-year earnings.

The company, which has amongst its customers Bombardier and Boeing Co, has slashed jobs and sold or merged a number of businesses to lower costs.

Honeywell’s expenses fell by 7% during the quarter, lifting its operating income margins up to 17.6%.

The company said it was expecting margins to grow further during the second six months of 2015.

Honeywell said it was expecting its earnings for the full-year to be between $6.05 and $6.15 a share. Its previous forecast had called for earnings of between $6.00 and $6.15.

Analysts were expecting the earnings to be $6.09 a share.

Excluding the currency impact, sales in the aerospace business of the company, which is its largest, were up 3% during the quarter, while sales in controls and automation were up 4%.

Sales dropped by 5% in its aerospace business and 1% in its controls and automation unit.

General Electric its larger rival raised it outlook for 2015 for the industrial manufacturing business and reported an increase of 5% in industrial profits for the quarter.

Revenue was down by 5%, its third consecutive quarter of declines. The company receives close to 40% of its overall sales from outside the U.S.

Analysts were expecting earnings to equal $1.49 a share on total revenue of just under $9.74 billion.

Stock at Honeywell has increased 3.7% during 2015 through the close of business on Thursday.