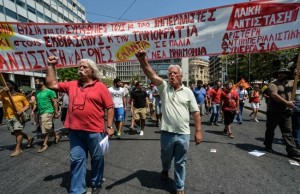 Pharmacists shuttered their businesses in Greece Wednesday, while civil servants walked off the job protesting against the new bailout agreement that saved Greece from going bankrupt but imposed strong reform in a nation already racked with crisis.

Protesters were marching against the austerity measures in Athens on Wednesday holding banners that read “Cancel the Bailout” and “No to the EU, IMF and EU” policies. However, just a few thousand showed up for the early rallies.

There were more marches planned for later Wednesday but opposition along the streets had been limited thus far and the opinion poll that was published Tuesday suggest that over 70% of the people were in agreement with parliament approving the bailout.

Lawmakers were going to vote on the austerity measures which are the key to unlocking much needed aid for Greece in order for the country to stay afloat but which are not easy to accept for most in a nation where the unemployment shrank by a quarter during the course of two prior bailouts.

Unions and lawmakers in Alexis Tsipras’ leftist government chafed at the tax hikes and the reforms in pensions that must be passed on Wednesday in a vote if the bailout talks with lenders are to begin.

Pharmacists already trying to wrestle with the difficulties of finding medicines amidst the capital controls and a row in exports, also called a strike to protests the plans that could have people without a degree in chemistry own pharmacies, said a spokesperson for the union.

In the bill, the government will commit to the adoption of its contents by July 22. This is one step to liberalize the economy required by its peers in the euro zone as a condition of opening up the aid talks.

Pharmacists are worried as well about the fact the latest EU statement foresees talks on opening up the sale of drugs that are over the counter.