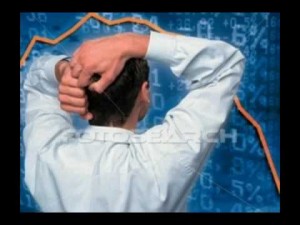 On Friday, stocks were slightly lower at closing after a session that was up and down. Friday’s session followed the sharp declines experienced on Thursday and capped the Dow’s worst week of 2013.

Investors once again have been haunted by increasing interest rates. The 10-year Treasury bond yield spiked on Friday to 2.85%, up from 2.76% on Thursday.

However, it eased back a bit to close the day at 2.83%. Yields at this time are at their highest point since July of 2011.

The housing market gave investors fresh news on Thursday. A government report said that builders had broken ground on new homes during July at an annualized rate of  over 896,000 units, which was up from June’s rate of 846,000 and just a few thousand short of the 900,000 that analysts forecast.

The strength in the housing market suggests that the interest rates rising only had a muted effect on the slowly recovering housing market.

In addition, investors were hit by a preliminary consumer confidence reading for August that was lower than expected.

The selloff for two days pushed the S&P 500 under the 1,675 level, which is a key area viewed by Wall Street as the first price floor at which things might subside.