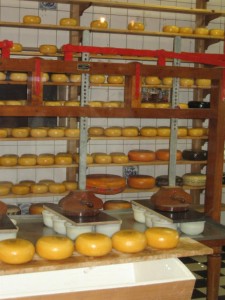 For artisan cheese makers aging their cheese on boards made of wood is commonplace in both the U.S. and overseas. However, now some members of the industry have become worried that regulators might crack down on the practice.

The U.S. Food and Drug Administration recently sent a communication to regulators in New York that said wood boards and shelves cannot be cleaned as well as sanitized adequately and because of that, is not conforming to a regulation regarding plant utensils and equipment.

The federal regulatory agency also wrote that proper sanitation and cleaning of facilities and equipment are absolutely essential to ensure pathogens cannot find any niches in which to reside and or proliferate.

On Tuesday, in a prepared statement the FDA seemed as if they backtracked on their stance. The statement noted that no enforcement action had been taken based only on using wood shelves.

While the agency said it expressed its concern about whether or not wood was able to be adequately cleaned, it noted that it was at all times open to any evidence that showed wood could be sued safely for specifics reasons, such as in the aging of cheese.

The FDA announced it would be meeting with the community of artisan cheese makers to determine if certain cheese types could be safely made through aging them on the wooden shelves and boards.

When the spokesperson for the FDA was asked what the process with the cheese makers would entail, she said she could not speculate on the next steps to be taken.

The communication to regulators in New York sparked much concern in the world of cheese making since much of the cheese that is imported has been aged on wood.

A senior extension associate from the Food Science department in Cornell University said that aging cheese with wood is a standard for identify for some types of cheese like Comte cheese.

One blog named the Cheese Underground said that a sense of distress and disbelief had been rippling through the artisan cheese community in the U.S.

The Denver based trade association American Cheese Society posted to its member an alert assuring all of them it would be mobilizing so it could learn more about the controversial issue.