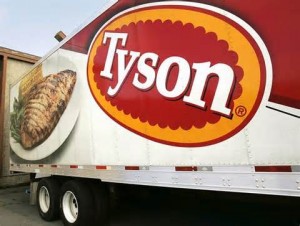 Tyson Foods won the battle to purchase Hillshire Brands Co by offering close to $1 billion more than Pilgrim’s Pride its rival. The offer by Tyson is equal to $63 per share and is all cash, which values Hillshire at $7.7 billion.

Pilgrim’s Pride unsolicited bid set off a bidding war in late May. Tyson’s updated offer represents a premium of nearly 70% to the price of Hillshire prior to the bidding beginning.

Winning the Hillshire bidding war would vault Tyson, based in Springdale, Arkansas ahead in the long running effort to increase business in meat products that are branded. Tyson is the largest processor in the U.S. of chicken and large processor of both pork and beef.

Packaged meats, such as those, generally have higher margins of profit than meat Tyson sells to food-service operations and restaurants, which accounts for a large portion of the sales at the company.

Hillshire’s sausage brand Jimmy Dean dominates the sales of breakfast sausage with close to one third of the U.S. market and its brand of hot dogs Ball Park a leader in that sector.

The deal, which is expected to be the biggest ever in the meat industry, would also be a huge victory for Tyson over rival JBS. The company, based in Sao Paulo, has emerged as the main rival globally of Tyson over the last decade by striking deals broadening it beyond its Brazilian beef processor roots.

JBS makes claims to be the largest meat company in the world with its operations in Australia and North and South America.

The deal would also cap a dramatic battle between Tyson and JBS for Hillshire, which earlier in May made its own deal for $4.3 billion to acquire Pinnacle Foods.

Only two weeks following the Hillshire deal for the Duncan Hines and Vlasic pickles company, Pilgrim’s Pride offered $45 per share for Hillshire.

Two days after Tyson bests the bid by Pilgrim’s Pride offering $50 per share that was topped with $55 per share by PP and topped now by Tyson at $63 per share.