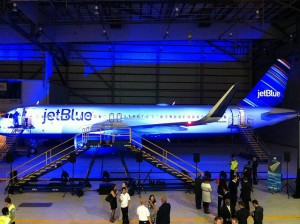 To lure more business class fliers, JetBlue has created a new value-priced business class service named Mint. The new service is being launched on coast-to-coast flights between New York and Los Angeles or San Francisco starting this summer. The lucrative transcontinental airline market has been a battleground where every company in the industry is fighting for market share. Industry wide, the transcontinental airline market is worth around $5 million a day.

Many of the customers that take advantage of JetBlue’s lower priced transcontinental flights are not loyal to the airline. Jamie Perry, head of product development at JetBlue, said, “We are introducing Mint, which is JetBlue’s take on the premium product, and we hope that will help us win back those customers.” Competing with Mint for business and high-end travelers is United’s p.s. Premium Service and American’s overhauled first class and business class sections. Perry said, “From a product and service perspective, we want to come in with something that we thought was head and shoulders above what everybody else is offering.”

Wi-Fi and posh seats are standard requirements for the Silicon Valley and Hollywood sets on those six-hour flights – two things that JetBlue flights lacked. JetBlue announced that the new Mint section includes 16 lie-flat seats that have the longest beds in the U.S. market arranged in a 2×2 and 1×1 seating arrangement, providing four private “suites” that has a sliding door for privacy. Last year, JetBlue got wired with Fly-Fi, which is being extended fleet-wide.

JetBlue figures that its lower fares for business class service will lure a lot of new passengers from its competitors. JetBlue’s business class fares between JFK and LAX and SFO start at about $1,600 round trip, compared with $2,433 to $4,573 for similar flights on the major carriers, as quoted by Kayak. Mint service begins in mid-June on flights from JFK to Los Angeles and begins on flights between JFK and San Francisco in October.