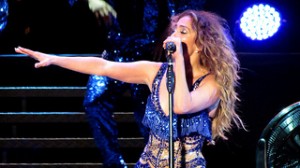 Jennifer Lopez the superstar entertainer and former judge on American Idol celebrated her 43rd birthday today. Lopez has two beautiful twins Emme and Max who are four years old. She is currently touring with Enrique Iglesias and has a new dancer boyfriend by the name of Casper Smart.

Some place Lopez’s net worth at over $150 million due to her singing career and successful movie roles. She currently is appearing in a recently released movie titled What to Expect When You’re Expecting. She was listed in Forbes magazine this year as no. 1 in the list of Most Powerful Influential Celebrities.

Lopez seems to be successful in almost anything she gets involved in. Her singing career has been successful with seven very popular albums that have sold over 70 million copies around the world.

She started her career in dancing as Janet Jackson’s backup dancer. She is also known for the long list of beau’s she has had both before and now after her marriage to Marc Anthony. They have included Ben Affleck, Sean Combs, Cris Judd and Ojani Noa. She was married for seven years to Anthony until their 2011 divorce.

She debuted in movies in 1995 with Money Train and then appeared in leading roles in five films that have been released since then. Off course, of late she has been known for her skills in judging. She spent the last two seasons as a judge on American Idol with Steven Tyler and Randy Jackson. She recently announced she would probably not return for another season and that was confirmed when the show signed diva Mariah Carey to a one year contract as a judge. Happy Birthday Jennifer.

Albemarle Shares Up 5% After Analyst Upgrade

LEG Immobilien Given a €82.00 Price Target at Baader Bank