Baldwin Dined With Stalker in 2010 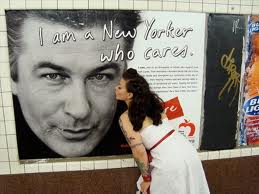 On Monday, the Canadian woman accused by authorities of harassing and aggravated stalking of Alec Baldwin, Genevieve Sabourin, was arraigned in a New York City court. Baldwin, spoke about the incident on Tuesday.

He said, “Isn’t it odd that while in handcuffs and being led away by the police, the accused stalker smiles for cameras.”

From March 31 until Sunday, the day of her arrest, Sabourin, aged 40, tried on at least three occasions to contact the actor in person. She attempted to do so at his homes in Greenwich Village and the Hamptons and at an event, Baldwin participated in. In addition, making the news on Tuesday was interesting information that said Sabourin and Baldwin dined together two years ago. Sources close to the actor described the dinner as completely professional.

Sabourin however claimed her relationship with Baldwin was both mutual and sexual. The accused stalker’s attorney said the two met and enjoyed dinner and had a relationship that consisted of email and texts that went in both directions. Among the different emails, according to court documents, was one that read, “Please Alec, come and get me now. I am only ten minutes from you.”

In other emails, she referred to Baldwin as her husband. In 2002, the two had their first meeting. Currently Baldwin is engaged to Hilaria Thomas and the couple lives together. On Monday, following her arraignment, Sabourin was released and was given a restraining order preventing her from emailing, texting or seeing Baldwin.