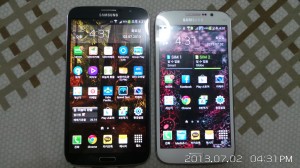 At one time companies wanted to make the smallest mobile phone available, but times have changed. Samsung Electronics, based in South Korea, has pushed the boundaries on size for smartphones with its line of Galaxy Note and now has gone where no other phone maker has yet been with its Galaxy Mega.

The Note II has a screen that is 5.5 inches in size, while the Mega, which is making its debut in the U.S. this month, sports a screen that is 6.3 inches. The Phablet will not be fitting in normal pockets of any shirt.

To put the new Mega in perspective, when Apple debuted its first iPhone it sported a display of just 3.5 inches. Today, the bigger iPhone 5 has just a display of 4 inches and that was considered a major difference.

Steve Jobs said about three years ago that tablets could not compete with the smartphone’s mobility, how it slips into someone’s pocket and can be used unobtrusively when amongst a crowd.

The Mega is certainly not unobtrusive. Its length is 6.5 inches and its width is 3.5 inches. However, it build’s off the Note’s popularity. The Note has found its niche in the competitive and crowded smartphone marketplace.

For all those not ready for the cookie sheet look, on Monday AT&T announced it would start selling the new HTC One mini.

This is the smaller version of the company’s flagship smartphone. It has a display that is 4.3 inches, which is still larger than the upsized iPhone 5.

Immunic, Inc. Given Consensus Rating of “Buy” by Brokerages