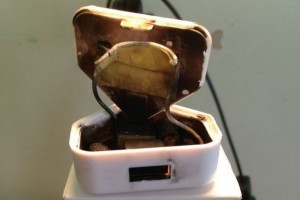 Apple started a program worldwide to replace counterfeit and third party USB chargers. The initiative follows reports that a woman in China was electrocuted by a charger that was non-Apple.

Apple announced it would swap the third party chargers to be replaced by a replacement for $10 or its equivalent in local currency. The program will start August 16 and run through October.

Last month, Apple said reports were being investigated that a woman in China, Ma Ailun had been killed when her phone rang and she answered it while it had still been plugged in.

After the incident, the third party charger had been blamed for the cause of the electrocution. Apple also recently updated information on its website in China with new data to help people identify what the fake USB chargers are.

Those wanting an official Apple charger must turn in the third party one and give their iPhone, iPad or iPod serial number it will be used to charge.

The cost of $10 is a discount on a charger than normally costs $24. Owners can make just one trade for each Apple gadget that is relevant. The trade-ins are also available at Apple stores or through service providers who are authorized.

Apple announced that the chargers that are fake or third party would be disposed of by the company in the best possible environmental friendly manner.

The reason for the electrocution was unknown but representatives from the Cupertino, California based company are investigating to better understand its cause.