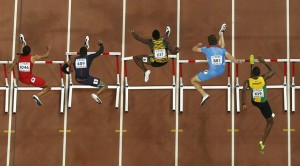 Russia has sharply rejected the allegations that it has a state sponsored doping program for its athletes dismissing those claims by the overseers of sport as groundless and not supported by and evidence that is clear cut.

This response points to what will be deepening battles between officials in global sports and the Kremlin after a very powerful agency of anti-doping charged that Russia relied on its drug program to give its athletes an upper hand in all international competitions, which would include the Olympics.

The accusations, which are detailed within a 323 page report that was released Monday, said Russian officials including Vitaly Mutko the Sports Minister directed drug labs to hide the telltale signs of PED or performance enhancing drugs.

Vladimir Putin the President of Russia call the allegations groundless.

The World Anti-Doping Agency reported by name some of the athletes involved but also used some anonymous information as well.

Many Russian officials stopped short of denying the WADA report claims instead saying that the evidence, which was presented was not sufficient enough to prove wrongdoing by Russia.

The report might have some serious consequences for Russia at a time when Putin has attempted to revive the culture of the Soviet-era in sporting achievement crowned by the country’s holding of the 2014 Sochi Olympics.

In the WADA reported the agency called into serious question some of the results from the London Olympics of 2012 and recommended that the track and field team from Russia be banned from the Rio de Janeiro Olympic Games of 2016, unless immediate action is taken by Russia.

Asked about a possible ban, a Russian official has said to ask the Sports Ministry about that.

The report on Monday suggested that the doping program in Russia might be much wider spread saying there is not any reason to believe that the track and field is the only Russian sport that has been affected.

One official from WADA said the corruption by Russia was by far much wider spread than originally thought.