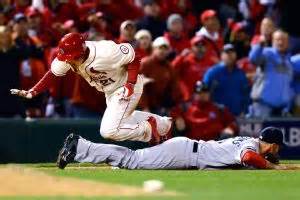 Game 3 of the World Series was as classic as they could come and only an obscure rule separated the two teams. St. Louis won the game 5-4 to take a 2-1 lead in the Series.

It was the first time in the history of the World Series that a game was decided with an obstruction call.

Will Middlebrooks was called with the obstruction foul against Allen Craig, who was awarded home plate giving the Cardinals the win. The Red Sox vehemently protested following the call, but to no avail, the umpire’s decision was final and Game 4 is Sunday night.

Red Sox pitcher Jake Peavy said it was upsetting that such a call decided a game so important. He called it a joke. Red Sox manager John Farrell said it was tough to swallow; a tough way to have the game end, particularly due to its significance.

In the bottom half of the ninth inning, St. Louis had the winning run on third with one out, with Boston’s infield drawn in.

A chopper was knocked down by Dustin Pedroia at second base; he then made a throw off balance to home to record the second out on Yadier Molina. However, Jarrod Saltalamacchia, the Red Sox catcher threw wildly to third in an attempt to get the advancing Craig.

At that time, Craig was already tangled up with third baseman Middlebrooks with legs and arms in a jumbled mess. As Craig stood up and attempted to score, Jim Joyce the third base umpire invoked the obstruction rule saying Middlebrooks had obstructed his path.

Craig was thrown out at the plate, but it was all for not, as Joyce awarded him the base and the score.

For 109 years of World Series games, no game had ever ended that way. Whether or not Boston agrees, the call was correct and they must regroup for Game 4.