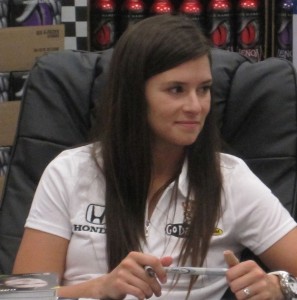 Danica Patrick, the NASCAR driver, has announced that her divorce has now become finalized.

A judge in Arizona signed the consent decree on April 15 between the Go-Daddy NASCAR driver and Paul Hospenthal her husband.

The decree was filed just two days after the signing, which ended the seven-year marriage between the couple.

Patrick, who is 31, announced last November on via her page on Facebook that she had split from her husband, saying the couple’s marriage had become irretrievably broken.

Patrick and her former husband first met after she saw Hospenthal, a personal trainer and physical therapist, for treatment following an injury to her hip. The two were wed in 2005 and have no children.

Patrick said in a November statement that her husband was an important person in her life and a friend and he would remain that way going forward. She said the split was amicable.

According to documents in the divorce proceedings, the couple signed a prenuptial agreement. Patrick did not seek alimony and paid the costs of the court. In addition, mutual property the two acquired during their marriage was to be equally divided at another time.

Patrick, who is the first woman to claim the pole position at the Daytona 500 announced this past February that she was dating Ricky Stenhouse a fellow NASCAR driver. Patrick is racing in her second full season on NASCAR following years of racing IndyCar.

She said you cannot make your heart love anyone, it just happens.