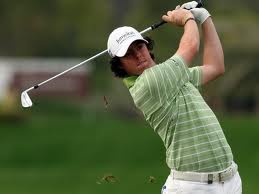 With his impressive win at the PGA Championship on Sunday, Rory McIlroy of Northern Ireland is back as the number one player in the world. The 23-year old looked like the superstar everyone has labeled him as, when he won the tournament by eight strokes. He ended his final round by sinking a putt from 25 feet for birdie. His final round score of 66 gave him a total of 13-under par. The margin of victory of 8 strokes broke a PGA Championship record that was set by Jack Nicklaus 32 years ago.

With the win, McIlroy became the youngest golfer since the late Seve Ballesteros to win two major titles and is now just two away from winning the career grand slam. He won the U.S. Open title last year and only needs the British Open and Masters to complete his career grand slam.

The young man from Northern Ireland took control of the golf tournament Sunday morning while completing his third round that had been washed out by a storm on Saturday. He completed the round in front of the field by three strokes and never looked back. Over his last 23 holes played on Sunday, McIlroy did not record any bogeys.

Tiger Woods started the weekend tied for the lead, but on Saturday before the storm ended play, he lost three strokes to par and was never in contention the rest of the weekend. He ended his final round with a 72 and tied for 11th place.