Azarenka Defeats Stephens but not until After Controversy 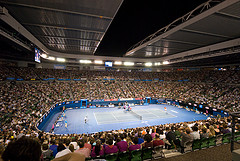 Belarusian Victoria Azarenka will defend her Australian Open title in the final on Saturday against Li Ha, the sixth seed in the tournament. However, Azarenka, while defeating American Sloane Stephens in the semifinal, experienced a bit of controversy that was not received well by both fans and commentators.

Azarenka was able to leave the court to be attended to by medical personnel for nearly 10 minutes during the second set of the match. Stephens had just fought back from five different match points and was pressuring the defending champion, when Azarenka called for medical assistance. Officials from the tournament said that Azarenka complained of two separate injuries, one to her left knee and one to her ribs.

Since she was complaining of two separate ailments, she was rewarded with two consecutive medical timeouts of three minutes apiece.

After she was helped by the medical staff and returned to the court, she defeated Stephens to reach the final. Following her match, she did not mention anything in her on-court interview about her medical problems.

Many fans at the match were upset that Stephens had worked herself back into the match only to have Azarenka stop Stephens’ momentum by claiming she was injured. The Belarusian told one reporter that she was having difficulty breathing during the second set.

Commentator Patrick McEnroe said the tennis world needed to re-examine the rules related to injury timeouts because no player should be able to leave the court due to being nervous.

It will never be known whether Azarenka was injured or pulled off great gamesmanship. However, she will be playing China’s Na in the final after Na was able to easily take care of Maria Sharapova in straight sets.