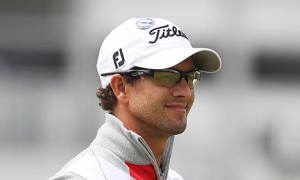 Adam Scott, this year’s Masters champion, did not think after finishing his final round that his score was enough to win on Sunday in The Barclays tournament.

Even his caddie had his golf clubs packed in his travel case. He thought being invited to the tower to speak with CBS was just a courtesy.

He only had the hope that Justin Rose and Tiger Woods among others would have difficulty in the closing holes so he could either play in a playoff or win outright.

When first Rose, then Woods and finally Gary Woodland missed birdie putts on the last hole, Scott hugged his caddie on the driving range as he was declared the winner of the tournament by a single stroke.

Scott watched his good friend Rose, miss a point to take the lead on the 18th hole, then miss the five footer to save par and fall a stroke behind.

Scott quickly unpacked his clubs and went to the driving range to practice but Woods missed his long putt from off the green to tie and only one player remained who could tie Scott.

However, Woodland missed his 10-foot birdie putt to tie as his ball rolled left at the cup.

With the win, Scott moved up to No. 2 in the World Golf Rankings behind just Woods.

Woods suffered numerous back spasms during the back nine, but was able to put together to straight birdies on 16 and 17 heading home, but could not will his putt in on the 18th.

Scott did not make any bogeys in his final round on Sunday. With the win, Scott moved up to second in the FedEx Cup standings with three more tournaments left to decide the champion.

It is unknown if Woods will play this weekend due to his back, but the tournament starts one day later so he will have one extra day to decide.