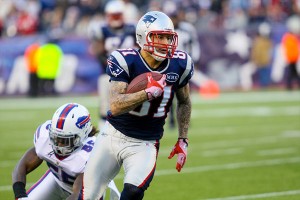 Law enforcement officials searched the home of Aaron Hernandez the New England Patriots player. Hernandez’s North Attleborough residence was searched on Tuesday after a man was killed who police said was an associate of the Patriot tight end.

Prosecutors and the State Police of Massachusetts arrived at the $1.3 million home of Hernandez, which has a home gym and swimming pool, at around 5 pm and were with Hernandez for hours in his home.

Two friends of Hernandez attempted to leave his home when the search was taking place, but were stopped by state police near the end of his driveway. The car, the two men were driving in, was later searched by investigators.

While the search was going one, Hernandez was delivered a package by hand from the law firm Ropes and Gray, with the man making the delivery saying it was addressed directly to Hernandez.

At first Hernandez did not cooperate with the police, after authorities located the body of a man near the player’s home.

Police recovered a Rhode Island rental vehicle close to the scene of where the man was found dead and that led them to Hernandez.

The body was found on Monday at about 5:30 in the afternoon and based upon the circumstances and nature of the body, the investigation had been given to detective in the State Police.

Many players on the Patriots call North Attleborough home because of how close it is to Gillette Stadium where the team plays its home games. In fact, the home owned by Hernandez was purchased by the tight end from Ty Warren a former player for the Patriots.