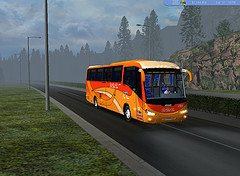 Federal Transportation authorities have shuttered 26 bus operators along the Northeast corridor following an investigation of over a year that found the companies were posing an imminent hazard to the safety of the public. The Transportation Department, which was in charge of the investigation, calls the orders for shutdown the largest individual safety crackdown in the history of the DOT.

The action that took place applies to nine bus companies that are currently active, 13 that had previously been ordered to remain out of service, but had continued operating and three that were in the process of applying to become operators. One ticket seller was also closed by the DOT.

The majority of companies were operated by I-95 Coach Inc., Apex Bus, Inc. and New Century Travel. The companies combined, transported over 1,800 passengers each day between Florida and New York on the I-95 corridor.

Among the companies there were a number of safety violations, said the safety investigators. The companies had bus drivers who did not have valid commercial licenses, did not have alcohol and drug programs and operated buses, which were not routinely repaired or inspected.

The DOT started their investigation early last year following a series of fatal bus crashes on I-95. Those companies named in the DOT investigation cannot operate under any other name going forward, under new rules that revoke the operating authority of the carrier and matches shut down companies to new ones.

Bus transportation has become popular once again due to the increase in gasoline prices.