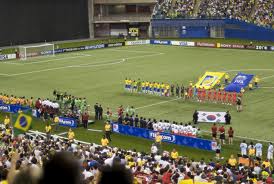 The tourism ministry in Brazil had indentified over 2,000 sites on the internet that promote sex tourism in Brazil, back in 2011. Many of those sites were hosted in the United States. The ministry said it found 2,169 sites that contained photos of women in provocative clothing and poses. The sites also included invitations for sexual liaisons with minors.

Since the ministry found these sites in 2011, they said over half of them have eliminated all of their content that was sex-oriented. The ministry said they continue to try to get the remaining sites to take the sex-oriented content down. This is all in preparation of the upcoming 2014 World Cup. Authorities want sexual exploitation of both minors and women eradicated before the start of the World Cup.

In early 2011, Brazilian authorities started to distribute ads and posters that warned residents and visitors that sexual exploitation of minors was illegal. Brazil also distributed the information to countries where the majority of tourists come from that visit Brazil. Included were the United States, Italy, Germany, France, Spain and the Netherlands.

In a statement issued on Tuesday, the minister of tourism in Brazil Gastao Vieira said, “Sexual exploitation is a crime and those found responsible for it will be punished.”

He said the country was running a campaign to promote its natural beauties, friendly people and cultural diversity. In 2011, over 5 million international tourists visited Brazil. Millions of people are expected to arrive in 2014 when the World Cup is played for a month in the country.