Study Gives Hint on How Heart Protected by Mediterranean Diet 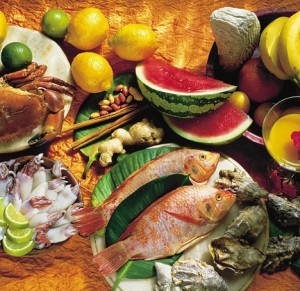 Multiple studies have shown that a diet that is Mediterranean style, which is rich in nuts, vegetables, fruits and fish seems to lower the risk of contracting heart problems.

Now a recent study involving mice hints at the reason why.

The lead researcher of the study, Philip Eaton a cardiovascular biochemistry professor at Kings College London said, when fatty acids, found in nuts, fish and olive oils are consumed together with a source of nitrite or nitrate, found in different vegetables such as those that have green leaves or beetroot, they develop nitro fatty acids inside the body.

Those acids then lower the blood pressure by being inhibitors of a particular enzyme.

While the study’s findings were made using laboratory animals and the results often cannot be transferred in humans, the professor believes it would happen in humans as well since they have that same enzyme.

Eaton also noted that even though this finding is new, there also is evidence that medications that inhibit the same enzyme might lower the blood pressure. Some pharmaceutical companies currently are working on the development of such a medication.

For this study, the scientists’ aim was finding out when the enzyme was inhibited was it enough to lower the blood pressure in the mice they studied.

They created mice that had a mutation that made the mice’s enzyme resistant to nitro fatty acids effects.

All the mice were given an enzyme inhibitor, the blood pressure of the wild mice decreased, but not with the mice that had been changed to the resistant version.

The inhibitor was able to protect the wild mice from damage to their heart, but did not protect the mice that had been re-engineered.

When the mice were fed food from a Mediterranean diet that made nitro fatty acids, once again the enzyme became inhibited in the wild mice, but not in the ones that were re-engineered.

The question is whether this same mechanism takes place in people and needs to be investigated. However, previous human studies have shown that blood pressure lowering effects have occurred when unsaturated fats and plant foods are consumed together.