Quitting smoking can be a real challenge. Although there are many nicotine replacement products on the market, such as nicotine patches or gum, smokers often find that the feel of holding a cigarette is really missed. This is why electronic cigarettes are worth considering if you are trying to quit smoking. 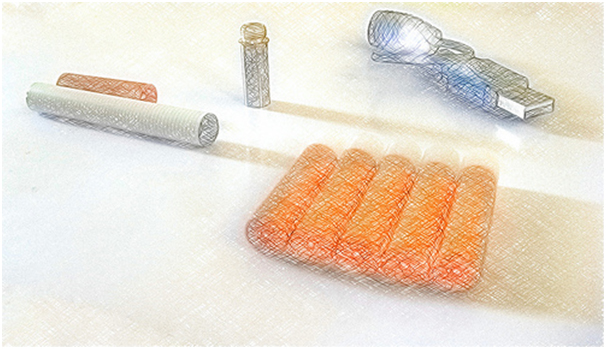 What is an E-cig?

An E-cig contains liquid nicotine, and is battery powered to convert this liquid into vapour. This vapour is inhaled by the smoker and expelled much in the same way, but although it does look similar to real cigarette smoke it isn’t filled with the chemicals of a real cigarette.

The only health issue with E-cigs at present is the nicotine, which is an addictive chemical. However, when compared to the real thing, they’re giving your body a real break.

Plus, the vapour is completely odourless; this means there’s no more smelling of smoke.

What’s a real cigarette got that an E-cig doesn’t?

When a cigarette burns, a chemical exchange occurs between tobacco and the body. These chemicals are incredibly harmful, and the leading cause of preventable cancer.

Smoking real cigarettes increases the chance of coronary heart disease, strokes, and chronic obstructive lung diseases. For women, the chance of developing lung cancer is increased by 13 times, while men can expect their chance of lung cancer increasing by over 20 times.

Chemicals found in cigarette smoke include:

When a cigarette is burned, more than 4,000 chemical compounds are created. For health, it’s much, much better for you to pick up an E-cig than a real cigarette.

James Dunworth from ecigarettedirect.co.uk pointed out: “ninety nine per cent of the harm of smoking is caused not by cigarettes but by combustion.

When tobacco is burned, smoke is created which contains tar and thousands of chemicals – including several dozen carcinogens. In contrast, nicotine vaporizes an e-liquid, and no combustion takes place. That’s why scientists like Professor Carl Phillips believe using electronic cigarettes is much, much safer than smoking cigarettes. “