Children must be checked for Motor Delays by Pediatricians 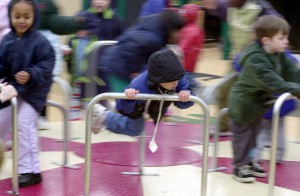 On Tuesday, pediatricians said that doctors need to screen babies, as well as young children regularly for any delays in the development of motor skills, including trouble standing, sitting or speaking.

A panel of the American Academy of Pediatrics through a clinical report said that diagnosing and then treating those types of problems early, might at some point improve the child’s outlook and help give families additional support.

The panel from the AAP set forth the skills that children should have developed at the ages of 9, 18, 30 and at 48 months.

Pediatricians should also ask the parents questions that are open-ended about the development of their child and what the children play so any signs of delay could be determined.

The task force U.S. Preventative Services, which is an expert panel supported by the government said back in 2006 there had not been sufficient evidence to recommend in favor of or against screening instruments that are designed to detect language or speech delays in young children.

Muscular dystrophy and cerebral palsy are two of the most common diseases that are motor related and both could be diagnosed and treated earlier that often times they are today.

The panel said there exists a normal variation of how each child develops. Therefore, a child might be a few months late walking, but parents should not become concerned.

McDonald’s Co. Given Consensus Recommendation of “Buy” by Analysts